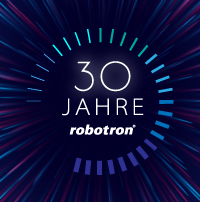 At Robotron, innovative IT solutions are created for the management of large data sets, shaping entire industries and our daily lives in a variety of ways

- from energy supplier to digital museum. Robotron is a traditional company, partner, employer and trendsetter. On August 23, 2020, the company will celebrate its 30th anniversary and start a year full of festivities. Check out our anniversary page. 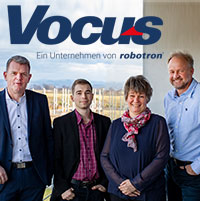 As of January 01, 2020, VOCUS Computer- und Softwaresysteme GmbH, located in Vogtland, is part of the Robotron corporate group - complementing the portfolio for public administration with its expertise. 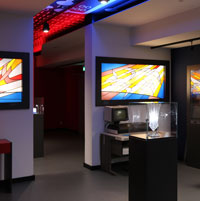 As part of the celebration marking 50 years of IT innovations under the Robotron name, the company's internal company museum was opened in the premises on Stuttgarter Straße in Dresden. 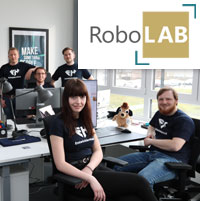 Robotron opens a new chapter and offers entrepreneurs and young scientists with IT focus modern office spaces and professional infrastructure equipment on their way to a successful start-up. 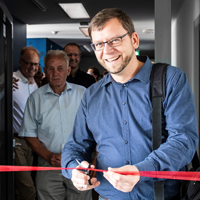 After a year of construction, 52 new offices with 200 workstations are created, as well as space for "hands-on software" in laboratories for IoT and smart energy systems.

At the same time, the site expansion is under the sign of "software as an experience". The Robotron SMART Campus project will demonstrate adaptive software for the optimization of intelligent energy systems. The newly installed photovoltaic system is the first visible step towards the Energy Campus. Another highlight of the new building is the in-house museum with a permanent exhibition documenting the almost 50-year history of the Robotron brand - from the founding of the Kombinat in 1969 until today. 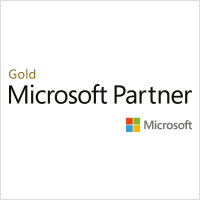 Since May 2017, Robotron has been a Gold Partner for the Microsoft Cloud Platform, making it the leading IoT partner in Germany. The Gold status is a reward for the diverse project experiences and the extensive expertise in dealing with the cloud technologies.

In a very short time, Robotron has become an important contact for companies looking to generate tangible and sustainable added value from the large quantities of data along their value chain. 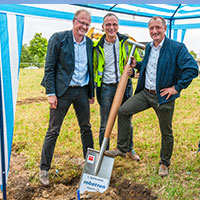 The number of employees is steadily increasing - space is slowly getting limited. Therefore, the construction of another office building starts in the summer of 2017.

While the last remnants of the former nationally-owned company disappear at Pirnaischer Platz, Robotron Datenbank-Software GmbH builds a new office block to accommodate the growing number of employees and to provide new workspace for the development of modern software solutions. 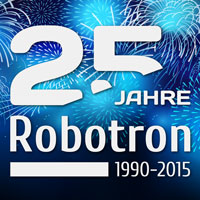 A Quarter is Completed...

...at least a quarter of the first century! The database specialists are celebrating Robotron's 25th anniversary in 2015.

Robotron can now look back on 25 successful years. The company employs more than 440 people in its branches in Germany and together with its subsidiaries in Austria, the Czech Republic and Switzerland as well as SASKIA® Informations-Systeme GmbH. The predominant university and technical college graduates with excellent expertise in both the database environment and industry-specific topics form the basis for the continuous development of the Dresden-based company. 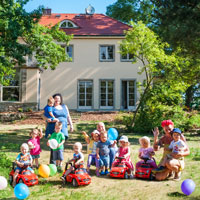 In the same year, renovation work on the old property is completed and the "Robolino" children's mansion,

which among other things offers childcare facilities for the offspring of Robotron employees, is ceremoniously opened. 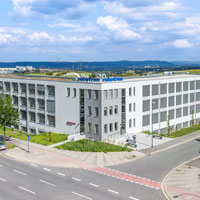 A new modern building complex is being constructed opposite the headquarters in Dresden, which will also accommodate the training center in the future.

Besides sufficient space in a whole dedicated wing of the new building, the Robotron training center will be equipped with state-of-the-art technology. Furthermore, more space will be provided for the steadily growing number of employees. The official opening of the new building will take place in 2014. 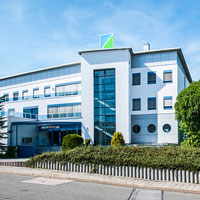 Since December 2014, SASKIA® Informations-Systeme GmbH has been a subsidiary 100% belonging to Robotron.

The new subsidiary SASKIA® (based in Chemnitz) offers modular solutions for finance and residents' affairs, regulatory offenses, trade administration, human resources and waste management and has thus been supporting public administrations and companies in their daily work for years. This enables Robotron to complete its portfolio in the business area "public administration" and also to become regionally active.
Besides new expertise, Robotron gains 60 new, highly motivated employees as a result. 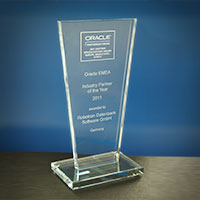 In 2011, Robotron is honored by Oracle with the "EMEA Industry Partner of the Year 2011" award. 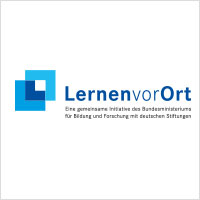 The Federal Ministry of Education and Research, in collaboration with German foundations, has launched the "Lernen vor Ort" initiative with the aim of introducing a more coherent education management system in the municipalities. One component of the project is the development of a suitable software solution that all municipalities can use in the future for data-supported, integrated education management. As the result of a Europe-wide tender, Robotron was awarded the contract for the development of this solution. 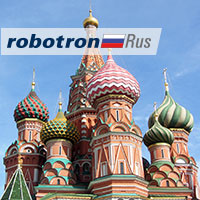 On its 20th anniversary, Robotron continues to further expand both nationally and internationally.

In Germany, several branch offices are opened in 2010, so ensuring more customer proximity in the Frankfurt/Main, Berlin and Hamburg metropolitan areas.
At the same time, Robotron is venturing into a new target market and founded a Russian subsidiary "OOO Robotron RUS". 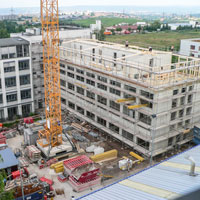 Because the company has grown to over 190 employees, the next step is quickly evident.

In coordination with Robotron Objektentwicklungs GbR, the managing partners decide to build an annex to the second office building at Stuttgarter Strasse 29. Construction work began as scheduled on March 9, 2009. 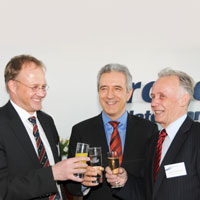 Proud of its tradition in database development, the company celebrates the 40th anniversary of Robotron Kombinat's foundation on April 1, 2009

under the title "40 years of IT innovation from Saxony". 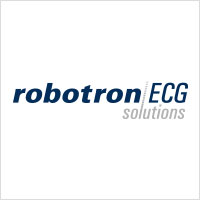 In addition to a partnership agreement, the first joint projects are being tackled with ECG Erdgas-Consult GmbH from Leipzig.

The increasing influence on the gas market leads to a close cooperation with the VNG subsidiary ECG Erdgas-Consult GmbH. In addition to a partnership contract, the first joint projects are being tackled.

The Swiss subsidiary makes an input of 10% and contributes actively and significantly to the positive business result.

In order to secure future market development in Russia, more intensive market work is started in the energy sector on the basis of a partner contract with the company Profconsalt in Moscow. 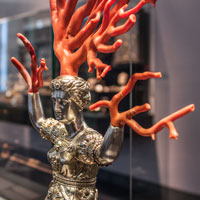 With the collection database robotron*Daphne, a web-based museum management system is added to the product portfolio following a joint development with the Staatliche Kunstsammlungen Dresden (State Art Collections). 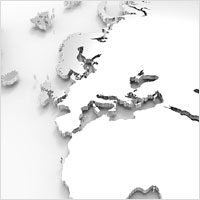 First approaches to representatives of the energy industry in Russia

Also in 2006, the first contact is initiated with representatives of the energy industry in Russia. Robotron is allowed to present its concept to the energy authority of Russia. However, it was to take several more years before the actual project was launched.
In the same year, our product robotron*ecount wins another well-known major customer with the contract at Vattenfall Europe Hamburg and Berlin. 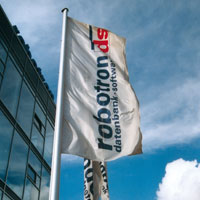 With the repurchase of the shares, Robotron is entirely independent once again.

Together with several of its employees, the company buys back the business shares of ORACLE Deutschland GmbH and thus secures its complete independence again in 2005 - after 12 years. The close partnership with Oracle still remains an inherent part of the company's philosophy. 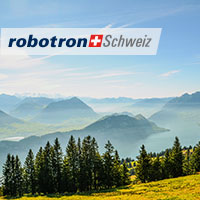 Shortly after its foundation, the subsidiary Robotron Schweiz GmbH conquers a leading position on the Swiss energy market

After successfully winning the contract for the EDM solution at ETRANS AG in Switzerland, the subsidiary Robotron Schweiz GmbH is established in 2004. A mere short time later, the company has captured a leading position in the Swiss energy market.
Meanwhile, the parent company in Dresden decides to set up an independent development department for the products robotron*ecount und robotron*esales. 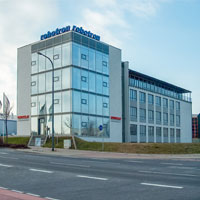 A new office complex is inaugurated

Having grown to more than 100 associates in 2001, the just recently occupied building is no longer sufficient. Therefore, part of the staff is allowed to move to the new office complex on Stuttgarter Straße 29, also located in the Dresden Coschütz/Gittersee commercial area. The company's headquarters have also been located here ever since. 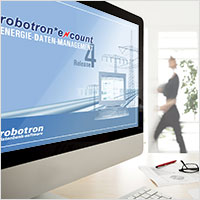 Robotron secures the contract with EnBW and fondly reminisces on a decade of succesfull work.

The company secures the contract with EnBW to implement the energy data management solution robotron*ecount at a first major energy supplier. But that is not the only reason to cheer: Robotron Datenbank-Software GmbH can celebrate its first big anniversary in the year 2000: 10 successful years in business are already behind it. 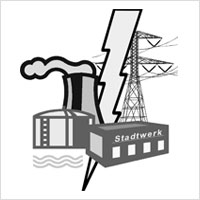 With robotron*SEA, the first steps and entry into the energy sector are achieved.

After successfully entering the energy industry with the disturbance recording and evaluation system robotron*SEA, the development of the product robotron*ecount was initiated in 1999 on the basis of the liberalisation of the electricity market. 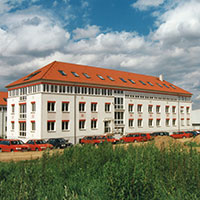 The Own Four Walls

Robotron moves into its own office building in the Dresden Coschütz/Gittersee commercial park.

The company leaves the historical location at Pirnaischer Platz in the center of the federal state capital and moves into its own new office building in the commercial area Dresden Coschütz/Gittersee. Continuously increasing numbers of employees and an ever growing lack of space made this step necessary for the first time. 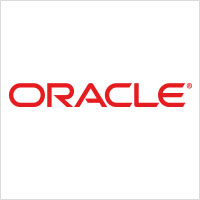 From the very beginning, the company has relied on a close and very successful partnership with ORACLE Deutschland GmbH.

This also determined the strategic and technological orientation of the project work. ORACLE - hardware and software manufacturer, particularly of the Oracle Database - acquired a 33% share in the company in 1993. At the same time, the Robotron Training Center was accepted as a permanent partner in Oracle's training system: a recognition of the existing know-how in the database environment. 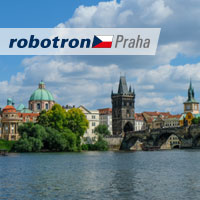 The first subsidiary in other European country is established in 1993 in the Czech Republic.

In 1993, Robotron crossed the borders of Germany for the first time and founded its first affiliate "Robotron Database Solutions s.r.o." in the Czech Republic. Since then the company has supported the parent company in product development and in various projects in the energy sector, public administration and industry. 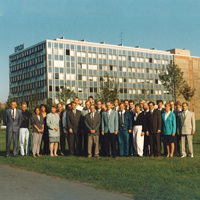 When the German reunification came and the Kombinat was about to be liquidated, Dr. Rolf Heinemann founded Robotron Datenbank-Software GmbH in August 1990 together with 8 other partners and 26 employees. The company's field of activity was and still is the realisation of projects for the effective administration and evaluation of large amounts of data on the foundation of database software. 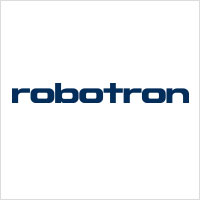 Since the founding of the public owend company in 1969, the name "Robotron" has stood for IT Competence

The name "Robotron" is still familiar to many from the time of the East-West German division. As the main East German IT company, the Robotron Kombinat was founded on April 1, 1969, with its headquarters in Dresden.
All IT capacities and competences of East Germany, as well as the software capacities in the large data processing centre of the Kombinat, the later "Center for Research and Technology" (ZFT), were to be concentrated in this form.
As part of this restructuring, the "Data Management" group, later the "Database Systems" department, was founded at the same time under the leadership of Dr. Rolf Heinemann. In addition to internal developments, well-known database systems were also analyzed and adapted.

Our website uses cookies and similar technologies. Some are necessary for the optimal functionality of the website and are automatically used when the website is used again. Others are not mandatory, but help us to further improve our content for you (e.g. for performance optimization). By clicking on "Agree" you accept the use of all cookies. Alternatively, you can use the Imprint to restrict the use of cookies when visiting the website and reject non-essential cookies. All information on data protection when using our website can be found in our Data Protection Declaration. There you can also adjust the cookie settings at any later time.